Treeverse is a tool for visualizing and navigating Twitter conversation threads.

It is available as a browser extension for Chrome and Firefox.

If you’re using Chrome, the icon for Treeverse should turn from grey to blue in your browser. Click it to enter Treeverse.

If you're using Firefox, the icon will be hidden until you open a tweet, and then it will appear in the address bar.

Conversations are visualized as a tree. Each box is an individual tweet, and an line between two boxes indicates that the lower one is a reply to the upper one. The color of the line indicates the time duration between the two tweets (red is faster, blue is slower.) 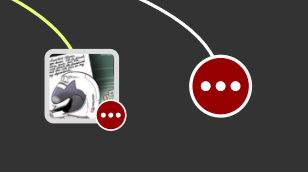 Treeverse runs entirely in your browser. No data is collected or tracked by Treeverse directly when you install it or explore a tree. The extension only communicates with the Treeverse server if you click the “Create sharable link” button, in which case the current tree to be sent to a server so that it can be made available to others. Access to the shared link server may be tracked to prevent abuse.

Treeverse is distributed under an MIT license. The code is available on GitHub.

Treeverse would not be possible without the excellent d3.js. Styling is powered by Semantic UI.